Home » news » Woman Who Tried to Ban Muslims from Her Salon Gets Roasted by the Internet, Arrested

Woman Who Tried to Ban Muslims from Her Salon Gets Roasted by the Internet, Arrested 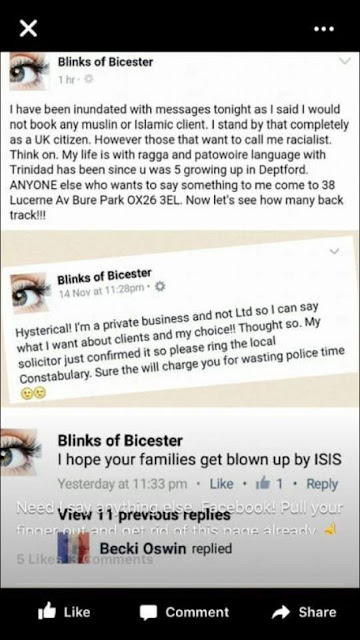 Friday’s horrific terrorist attacks in Paris have garnered the majority of media attention and stirred up a lot of emotion in the western world. But one woman took things too far in the aftermath of the tragedies, using the incident in Paris as an excuse to discriminate against any and all Islamic people in the UK who might happen by her business. According to the Mirror, 43-year-old April Major, owner of Oxfordshire salon Blinks of Bicester, took to her company’s Facebook page to announce that they would no longer be serving Muslim customers in an effort to “put [her] country first.” Because nothing says patriotism like good ‘ol discrimination.

“Blinks of Bicester are no longer taking bookings from anyone from the Islamic faith whether you are UK granted with passport or not,” the post read. Naturally, there was a public outcry from people who found the policy to be aggressively bigoted. Major attempted to justify her position by claiming she’s not a racist because she has brown friends (”My life is with ragga and [sic] patowoire language with Trinidad”), but this flimsy excuse for her rabid bigotry wasn’t enough to keep her from getting in trouble with the law – especially after she told some commenters, “I hope your family gets blown up by ISIS.”

The Thames Valley Police have since taken Major into custody over her harsh words online. She has yet to be charged. “We have arrested a 43-year-old woman in Bicester today after a number of complaints about a racially abusive post on social media,” the department said in a statement posted to Facebook. “The woman was arrested under section 19 of the Public Order Act which relates to the display of written material which is threatening, abusive or insulting with the intention of stirring up racial hatred, and for producing malicious communications.“ According to the Evening Standard, Britain’s Equality Act of 2010 states that businesses cannot discriminate against customers based on their religious beliefs.

It seems Blinks of Bicester’s Facebook page has also since been shut down, but not before a troop of internet all-stars came in and inundated the page with bad and ofttimes hilarious reviews… as well as thousands of one-star ratings.

“Went in for an upper tash thread, was upset with the outcome,” one post read – accompanied by a photo of Adolf Hitler.  “Hitting ISIS right where it will hurt them most, in the false eyelashes. Take that,” another commenter wrote.

“Came in asking for a BCS (back, crack, and sack), but they must have misunderstood me because I left with a bible, crucifix, and subscription to Britain First! Will not be returning,” another witty commenter quipped. But the comment that rang the truest has to be: “Protecting your business? Ha, you’re not going to have a business after this!”

In the wake of all the negative news we’ve been grappling with all weekend, it is wonderful to see a community come together against ignorance and hatred. The last thing we need in the world is more hate and pain, and the very public and overwhelming rejection of narrow-minded thinking should give us all a glimmer of hope in these dark times. Well done, you guys!