This month will see the last videocassette recorder (VCR) produced in Japan, according to reports. Once no home was complete without a library of chunky black cassettes and a recording device with a slot you had to keep telling the kids not to insert their toast into. 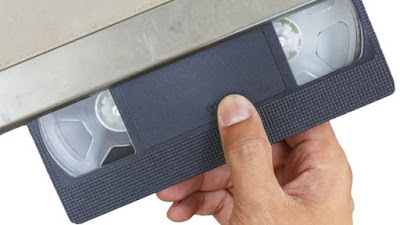 Home video changed everything. Now you could record TV programmes and watch them again, rather than having to commit them to memory and then play them back in your head. Plus you could rent movies from the video shop and enjoy them at home, instead of having to sit in a cinema alongside other humans who might not appreciate Tom Selleck or Molly Ringwald as much as you did.

In the "format wars" of the 1970s and 80s, Video Home System, as no-one ever called it, handily saw off rival like LaserDisc and BetaMax. Some speculated the pornography industry's preference for VHS made the difference, although this has never been proved. The adverts in which an animated skeleton, channelling Buddy Holly, promised that with Scotch tapes you could "Rerecord, not fade away", surely played their part in winning over hearts and minds.

But there were downsides you had to balance against being able to fast-forward through the adverts for the first time. The tapes would sometimes chew up and the picture quality never quite did justice to that David Lean epic you were watching. The recorders were a nightmare to programme (unless you were under the age of 20, in which case you were generally designated Official Household VCR-Operator) and all too often you would return home to find someone had recorded over that film you were really looking forward to watching with an episode of Knots Landing or Airwolf.

Friends of VHS may have predicted its demise when the DVD was launched in 1995, or indeed when digital video recorders like Tivo and Sky+ came along, and then when the internet and streaming services like iTunes, Netflix and iPlayer meant you didn't have to trudge all the way to the video shop to rent the latest Patrick Swayze or Mel Gibson masterpiece. A vinyl-style hipster VHS revival is not anticipated.