Thinking about buying a PlayStation 4?

One of the first questions you have to ask yourself do you want a Black or glacier white PS4! I personally like the white. The console itself is Half gloss half Matt design. On the top of the console there is a line of light, which glows blue when you boot it up, then goes white when it's in use. When you put it in "rest" mode it lights up orange. 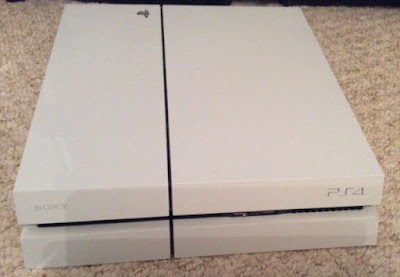 There are two USB 3.0 ports on the front as well as a slot to put your games and Blu-Rays in. In the rear you'll find HDMI, Ethernet, a digital optical audio out and a proprietary auxiliary connection for the PlayStation Camera.

With more graphical power than the Xbox one and is half its size. Well that's the exterior done, All in all looks really stylish.

Currently the only PS4 on the market is a 500GB of memory, which is easily double PS3 console memory. Which should be enough memory for all your games and apps.

The console is easy to set up, you can easily plug in and play.

It comes with a dualshock 4 controller, which is a great fit for your hand. It also has a touch pad and lights up various colours depending on the game. And another new feature is the share button, when you are playing a game it automatically records 15 minutes of gameplay, ready for you to share on Facebook or YouTube with one touch of a button. And can charge your Dualshock controllers even when the system is in "rest" mode. It also has a little speaker on the control pad which interacts with games which is a nice touch. Plus has a 3mm headphone jack in which any headphones can be plugged into it, which is really handy if you don't want to make a noise, it automatically mutes the volume on the TV and it only comes out the headphones.

eBay is a great place to buy a PS4, and you never know you could grab yourself a bargain! But If you are buying one on eBay make sure you read the description, obviously you don't want to think you're buying a new one and it to be used or even broken!

Don't get me wrong there is nothing wrong with buying a used one as long it's from a respected seller.
All in all its a great next gen console, Graphically the PS4 is far superior than the PS3. And lots of new features. Having recently brought one myself recently I would highly recommend getting a PlayStation 4.